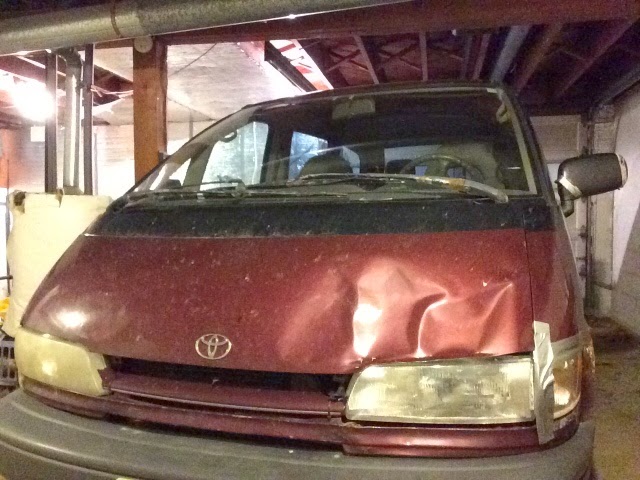 Sometime in the next week I will go over 322,000 miles on my 1993 Toyota Previa minivan. Every thousand miles is another little astonishment for me, because cars don't last to 322,000 miles! The engine should have siezed up years ago. The transmission should have broken. I should have at least rusted something apart in the last 21 winters.
If I had to categorize the experience of driving a 20+ year old vehicle in the rust belt every day with 300,000+ miles I could use two words thankful and fearful. I am thankful that it has come this far and fearful that tomorrow something is going to break and I will be stuck by the side of the road. Really neither should be surprising. This whole experience, driving this the last seven years, has shown me that people often buy new cars to really drive down that fear. We don't think of it that way, but certainly people buy new cars rather than used because the repair costs both in time and money will hopefully be less. It's true, as an engineer I know how things fail, and the newer you get it from the factory, statistically the less likely you are to have a major problem.
The flip side of it is, we aren't as thankful for the new car in the way we are thankful for the old. When I see my van in the parking lot I smile sometimes because it just keeps on running! Oh sure, you can be thankful your new car smells new, has no problems, that you can afford it, etc. but you aren't thankful it still drives, because for the amount of money you paid for it, it had better work.
Another highlight for me is that it gives me perspective on appearances. You can dent my van and I won't care. Also, I know that my value both intrinsic and economic has nothing to do with the car I drive.
I have realized only recently how much this van has shaped my views on quality. Now that I have taken one vehicle over 300,000 miles I fully expect other vehicles to go the same distance with only minimal repairs. That, and I have no problem using zip ties and duct tape to keep it running. Some may view that as a low quality strategy, but they are economical and widely available. There are multiple levels of quality, but for most vehicles, getting safely from A to B at the desired speed trumps every other aspect
Posted by Isaiah at 6:54 PM