"I don't believe in human caused climate change" he said. I didn't respond. As we walked I pondered what he really meant.

For Christians, "belief" is a strong word. We are told to put our faith, hope, and trust in the Lord, not in earthly things or people. I read a good article recently about how teaching climate science was not about facts, but emotion.

It didn't snow, at least snow enough to warrant a shovel, plow, or any snow removal equipment, this winter in Independence. It's an anecdotal data point, but people who have lived here for a decade or more say that it does in fact snow here, which makes it an interesting, four month long data point.

The glaciers are melting. Andrew's Glacier in Rocky Mountain National Park, just below Taylor Peak was the first time I wore crampons in the summer of 2004. I returned in August 2010 to climb Sharkstooth, and the glacier was totally melted. Again, I was there later in the season in 2010 than 2004, and it's one anecdotal data point, but for me that was a tough pill to swallow. I can't take someone else to that glacier to teach them snow technique, at least not toward the end of the summer.

The Khumbu ice fall on Mt. Everest seems to take more ladders and have more crevasses than it used to, according to the locals who have worked there for many years in a row.

In September 2015 I visited Mt. Hood, and apparently it was one of the lowest snow years, in decades, and with modern snow making machines and weather forecasting it was a surprise. We hiked up rocks and dirt for hours before reaching the snow.

Belief is not about facts, and facts are not about belief. The recent Tangier Island incident is a perfect example. The town believes one thing, in a person, yet there are facts affecting their life and future, which do not perfectly line up with what they are being told to worry about. Similarly when the "costal elite" scream that people should believe in this or that, it's a failure of vocabulary. Are glaciers melting, yes or no? Are sea levels rising, yes or no? In other words, it doesn't matter what you believe, the truth is the truth. The reasons for the facts... well, I suppose we have to leave something for us to argue about.

I'm not saying you should "believe" in human caused climate change, in the same way that you do not believe in the speed limit, airport security, or corporate benevolence as the purpose of life, or the answer to a given problem. I am saying that examining the evidence, and respecting the evidence and likely outcomes is just as wise as respecting the speed limit as you drive down the highway. The speed limit is not going to save you in the way that you believe Jesus has saved you; however, ignoring the speed limit might very well get you killed in the same way that ignoring climate change may cause dramatic coastal flooding.
Posted by Isaiah at 3:34 PM 2 comments: 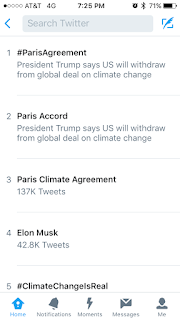 It wasn't hot the last few years on accident. It did not snow here in Independence this winter because the earth is warming. Hurricane Sandy didn't hit New York City by mistake. These recent torrential rains are not strange, we should expect more extreme weather events. Since climate change is in the news a lot today, and of course tomorrow will be another emotionally draining issue, her are the top five things trending on twitter:
Posted by Isaiah at 8:30 PM 4 comments: