With the news that 95,000 US jobs were lost in September it seems evident that the economy is not really getting better. If the GDP is what defines a recession, and it is calculated according to the Income Method, and the top 1% of households controls over 42% of the financial wealth, then a very few people have a whole lot of power and the statistics about the economy do not adequately reflect the reality. Which is to infer, from my extremely limited understanding, if the economy drops X%, that is the GDP in this case, the wealthy 1% who still have plenty of money will quite likely make layoffs and then in the next quarter the profits will go up because the expenses were down and the inventory on hand was enough to make up for the reduced rate of production. Another example is how the real GDP, that is more or less the inflation adjusted GDP, must supposedly increase more than 3% per year for unemployment to go down. This causes me a little distress.

It seems that we are looking at 5-6% non-inflation adjusted GDP growth necessary for unemployment to go down. That seems unsustainable to me. For example, what if agriculture reaches 97% of sustainable world wide production. We live on a finite earth it makes sense that there is a finite sustainable limit. Although the actual limit may be very difficult to reach we will get within a few percent somewhat rapidly, if we aren't there already. Which is to say that that particular industry would not be hiring anybody new except to replace those who leave the business. It would not be able to feed more people than the 97% of the total sustainable world population. Until, of course, they reach 97.1% of sustainable agricultural production then they would be able to feed 97.1% of the total maximum world population. 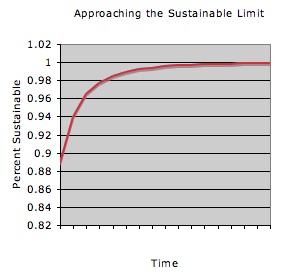 The graph above is my idealistic interpretation of reaching a sustainable limit in anything. Now ideal things do not happen too often. A more realistic approach to things like the economy and agriculture would look like the yellow line on the graph below. 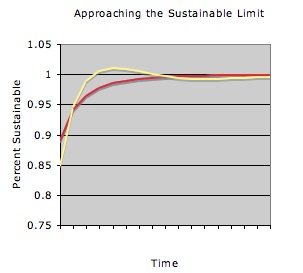 What occurs is that growth occurs at some rate for a long time and begins using up non-renewable resources. At some critical value species become extinct or some sort of environmental collapse happens and it is no longer possible to continue the way things used to be. There must be a decrease of something if the sustainable limit is passed. I just threw together the graphs above together. They are not based on any particular scientific data. They are simply my general interpretation of sustainable development. Sustainable development is somewhat of a contradiction. To elaborate I mean continued technological advancement without using non-replaceable resources.

Taking a tangent for a minute I will make up an example. Imagine that the only source of heating in your house is burning one tree per year. You own a few acres of land and have figured out that you will be able to harvest one tree per year indefinitely. You are in essence collecting the interest from having a forrest. Much like only spending the interest from your savings account each year, except that a tree will go up in price with inflation where as the four dollars you make in interest every year will only be four dollars every year. Now pretend that you own 80 pounds of steel to make a fireplace or furnace. You have the choice of making one of two types of furnaces that require the same amount of metal and will both last for 50 years. Type one will cost half a tree to manufacture and require an entire tree each winter to heat your house. Type two will cost two trees to manufacture and require half a tree each winter to heat your house because it is more efficient. Obviously, if you plan to use the furnace for more than three years type two is a better investment. Type two represents a technological advancement over type one. The logical question that is asked about this example, who created the type two furnace in the first place? Well, I incorporated that into the manufacturing cost of two trees.  My theory is that necessity is the mother of invention. If 10,000 people are all using a type one furnace a few might not want or be able to burn a whole tree every winter and they will figure out a way to make it more efficient. Granted this is an extremely simple explanation for sustainable development. In reality the system would be much more complex because some complex problems are best solved when a group of people work on that specific problem full time.

Going back to the economy... It's a big world. My recent inspiration to search for work abroad because of the economy in the US inspired this post. I finished my masters degree when the US was experiencing 10% unemployment. Not great timing. It feels so often that the economy and in large part our financial security is beyond our control. I do not think that is entirely the case. I can not blame the economy for myself not having a job. I can list it as a contributing factor, but the way I see it my current plight is really about finding the right place to expend my energy selling myself. Ha! "finding the right place to expend my energy selling myself." I thought that getting the education would be the hard part! I think that was "old school" thinking. Well, I think that I have had to relearn some lessons from the Great Depression. For sure, I will not look at a dollar the same way in the future as I used to. I apologize retail industries. Had I started an engineering job directly after graduating college I am sure I would spend all sorts of money. Now, that's not where I will find security.

All of that being said, life is about relationships. Hopefully you and I get along well.
Posted by Isaiah at 7:23 AM