I like to push people to do better. I like to run with people farther than they have ever run before. I like to climb taller, steeper walls with people who have never done something like that before. I like to tell people they can do it when they have doubts. Unfortunately, this has not worked out so well this summer. My recent failure on the Grand Teton magnified a few communication problems I have been having in my head this summer. I haven't really communicated wrongly with others just myself.

As I get more experienced I try to do things like run farther, climb higher, go lighter, stretch the boundaries of a "one day" attempt, and the like advanced skills. The problem is that I am taking people with me who are less experienced in the mountains. Trying to do the Grand Teton in one day demands very strong people who aren't going to fool around and waste time. The route is 6800 vertical feet from car to summit and perhaps eight or nine miles one way with at least two pitches of fifth class rock climbing on the easiest route. I have only done that much vertical elevation in one day twice in my life. Add to that the whole trip has to be done carrying rock climbing gear (heavy) and get down before bad weather (the lightening is scary up there). When I look at the statistics more I realize that I was really trying to do something that would be a bit of a challenge for me. I was taking three people with me who were just not as strong as I was. It was a strong group. Had we tried to do it in two days I think we would have been very successful. Yet trying to do it in one day was a little bit too much.

Riding back the next day I thought about yet another mountain climbing failure this summer. I have only topped out one climb this summer and that was Castle Rock in Boulder Canyon perhaps 400 feet high. I have failed on Longs Peak three times. Lumpy Ridge (the Bookmark), the Petit Grepon, and the First Flatiron (I did get up it once) all repulsed me once. Those other failures are because I was trying to take people up something that was just too difficult. They were all capable of doing it yet because of time constraints due to work schedules or weather we just were not moving fast enough.

I have been selfishly attempting objectives that I want to have under my belt. I have been doing this without much regard as to the partner I am climbing with. I will use a running example to illustrate my point. These failures would be similar to taking a running who usually ran 13 miles once a week at eight minutes per mile pace and trying to get them to run 17 miles at seven minutes per mile pace. Possible? Probably, but that is a really difficult step up. The chances of actually hitting that goal are very low. The pace will dwindle or the run will get cut short.

What I am trying to say is that after this summer I am less likely to take newbies out to do something I consider interesting. I will still take inexperienced people out climbing but on objectives which are not very ambitious by my standards. I have the skills and the physical and mental conditioning to do technical things solo carrying all of my own ropes and gear faster than taking others along.

I read a biography of Hermann Buhl and I will paraphrase what someone, perhaps Reinhold Messner, said about him. 'Buhl was driven to solo climbing because he was so good that he was criticized by the other climbers and thus had a difficult time finding a climbing partner.' That's not at all why I solo climb. I do it mostly because I can not find a partner who can keep up with me. I definitely do not get criticized for being too good. Anyway, I had three failures this summer on objectives I have the experience to handle. At least in part they have all been due to the people I have been with. As the leader of the group it is my duty to instill confidence and provide strength for the group. However, when I look into someone's eyes and see fear it magnifies the fears in my head. I am influenced by others. Also, when I set time goals for certain way points along the way and we are not hitting them I get worried. Despite getting up 4800 feet and seven miles on Grand Teton in a mere five hours I felt we should have been faster.

I have taken 18 people traditional lead climbing for the first time. I have thought about starting to charge people for my services. Most of the people in the world do not have free access to a climber and runner like me. (Most don't want access anyway because they will never run or climb.) I have several friends that guide for different guiding companies, and I have talked to many more mountain guides. I also have similar experience in the running world (although I have much farther to progress in running than I do in mountain climbing). I enjoyed teaching 11 and 12 year old boys to rock climb and rappel this summer. In large part because I was getting paid to do it.

What does the future hold? Will I continue to take newbies out on grade II and III climbs? Will I take less conditioned runners out on long runs? Perhaps I will. In fact, I know I will. However, I think I will be more selective in the future. That is to say no grade III climbs for new trad climbers. I will probably not do any of my long runs or important workouts with people who haven't done similar runs.

Anyway, I'm still here. I still really like pushing people. I like teaching. I like taking new people to do things. I will continue to do all of those things I have done before, but with a little less ambition. I had a friend tell me this summer, "Isaiah, you are the most ambitious person I know." So I will tone it down a little for my friends. Still the pushing people to new limits, but no shoving. 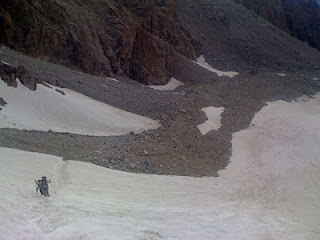 Just before the lower saddle on Grand Teton. Three of my friends crossing a snowfield in tennis shoes. (I  recommended not bringing boots and crampons or ice axes.)
Posted by Isaiah at 8:29 AM