It's Not Rocket Science: Week 21 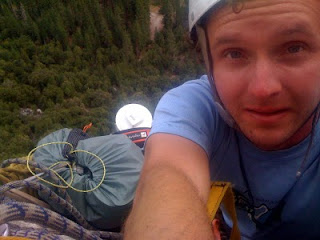 The week started as many of my weeks do. I went to church, walked
around Boulder looking for a book, then I went for a run. Simple enough.
Then Monday my climbing partner and I woke up at 12:30 AM and drove
from Rollinsville to Longs Peak and attempted the Casual Route on The
Diamond. However, after making it through the 5.7 traverse in a light
drizzle and 40 degree windy conditions we decided to rappel off. We
did six double rope rappels to get back the where we roped up in the
morning. It was a really great day. Very long but very satisfying. I
intend to write an article about it in the near future.
Tuesday saw me drive to Utah. Wednesday saw me try to climb Castleton
Tower then drive to California. Thursday was more driving to Yosemite
followed by getting a spot at Camp 4 and trying to figure out what to
do next.
Then Friday and Saturday saw me work The Nose on El Capitan. Friday I
fixed the first two official pitches (actually three pitches) and
dehydrated myself in the process by only bringing a 20 oz. water
bottle. I returned Saturday with four gallons of water, a pile of
food, and a sleeping bag. Intent on getting to the top in about four
days. Well, as I worked through the clean aid 2 with fixed gear pitch
I came to a blank section. A section where a copper head would go
prefectly. However that is the fixed gear part of that rating and I
did not bring any gear to fix. Thus to the cheers of people from El
Cap meadow I tried to pendulum to a crack on my right. I was just a
few feet short of a nice two inch wide ledge so I thought I could make
a hook move on a quarter inch thick flake to reach it. I set the hook.
I played with it a little. Then I moved my weight onto it. In the
process it must have shifted or the flake broke because I heard the
ping and went flying through the air tearing my skin and shorts as I
scraped across the rock. Bleeding, tired and sore I decided that I
would rappel off only a scant 500 feet into a 3500 foot climb. Below
is a picture just before I rappelled from the belay at pitch three.
Posted by Isaiah at 11:54 AM

Email ThisBlogThis!Share to TwitterShare to FacebookShare to Pinterest
Labels: climb