Okay, first I am on my phone, so excuse the brevity of this post, and lack of better pictures from my two other cameras.

First is Tshering Sherpa who climbed with me to the summit. Here he is sitting on it, it was about a 20 foot long by 1 foot wide perch. I took pictures with three cameras, but had a wardrobe malfunction with my main one, so don't hold your breath for any great pictures from me from the summit. 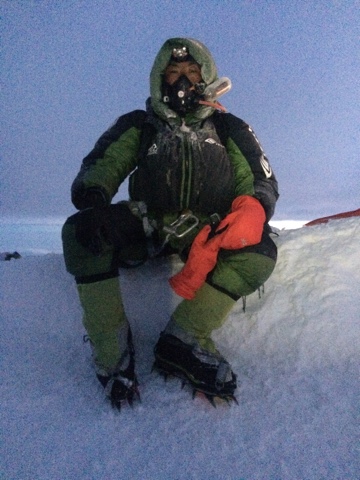 Next is from my first attempt, when I used oxygen and didn't feel like climbing higher than camp four here is me chilling at the south col.
What's been in my mind all day was how hard it was to climb Mt. Everest with bottled oxygen? I can only compare to other experiences so here are the hardest physical days of my life:

The list gets pretty dense after this with lots of 10+ hour days and painful races. Also, I'm writing this on my phone at Everest basecamp so I might change my mind back at sea level in the states. Worth noting, I have to cry from the pain to make the top five, maybe even top eight but I can't remember for those three.

Email ThisBlogThis!Share to TwitterShare to FacebookShare to Pinterest
Labels: Everest