It is officially 26.4 miles including 6700 feet of vertical elevation and two passes over 12,000 feet. The start is either the Mitchell Lake Trailhead or the Long Lake Trailhead. From there the trails allow a runner or hiker to link up Buchanan Pass to the North and Pawnee Pass to the South. The topo map and elevation graph give an indication of the seriousness. So here is the story...

I discovered this route in the spring. I have hiked in this area many times through my job at a camp a few miles north of Ward. Furthermore I see the peaks Sawtooth (just south of Buchanan Pass) and Audobon (right in between the two passes) on just about every run that I go on from the Peak to Peak highway to county roads 96 and 103 and the road to Jamestown. I decided early in the summer that I wanted to give it a try. However, I did not want to try it in a rainstorm. I only just decided the night before that I would actually do it. We had serious rain storms Wednesday and Thursday up here at 8800 feet so I was worried it would be bad weather and I would just end up gym climbing in Boulder on Saturday. Finally, Friday night I made the call that I would go and announced it on Facebook.

I have to work Saturday mornings so I worked to clean up our camp for the next week of campers. At 9 AM I was cleaning the kitchen counters. At 10 AM I was swinging a hammer trying to take nails out of boards. At 11 AM I was on my way to Brainard Lake. I had a bit of a late start. When I arrived they told me that there were no open parking spots at the Long Lake Trailhead or Mitchell Lake Trailhead so I had to park on the south side of Brainard Lake which added about a half mile each way to the trip. I had a park ranger snap a picture with my iPhone before I headed off. The time stamp for that picture is 11:19:43 AM 7/10/2010. Then I started the sufferfest. 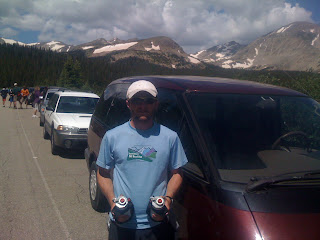 The gear that I took for the adventure was: Mizuno Yellow lightweight trainers, Ironman Wigwam Socks, running shorts with mesh elastic waist pockets (I forgot the brand but they are great shorts), Joe Colton Off Road Run race t-shirt (I was seventh this year in the 15 mile race), Nike running hat, Tifosi sunglasses, two Ultimate Direction 20 oz water bottles, 3 oz Montbell Ultra light wind jacket (with full zip and hood), a tube of Cliff Shot Bloks margaherita flavor (200 calories), two GU gels (Espresso Love and Orange, 100 calories each), my iPhone and head phones, and the key to my van (seen behind me above).

It took me a little over five minutes to get to the road intersection of Mitchell and Long Lakes. Then I headed toward Coney Flats. The trail went above tree-line slightly was a a little rough then it dipped down and I had a nice two miles downhill at a nice grade. Between the cutoff to Coney Flats and Coney Flats I only saw one other person and he was doing a little running as well. I reached the entrance to the Indian Peaks Wilderness 1:12 after starting for about 7 miles at that point so I was doing around 10 minute miles. 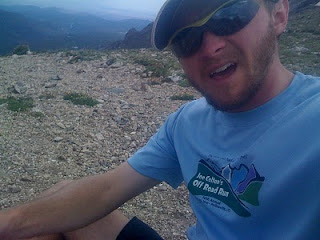 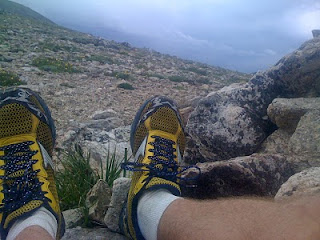 At 2:08 (after I started) I started the run down. I didn't see any people for several miles running down and I was alone for about an hour and a half. When I finally saw some backpackers I asked if the trail to Pawnee Pass was ahead of me. The said it was but that kind of destroys my unassisted claim. I ended up taking all of the right trails with no one to help me but I kept asking along the way if I was on the right trail because I didn't carry a map.

At 3:20 (after I started) I hit the trail sign for the Cascade Creek Trail and I took a left. About this time I got really tired. I rarely run more than three hours and my body knows that so it was letting me know. On the uphill from the trail junction to the top of Pawness Pass I ate my four remaining Shot Bloks (out of six) and both of the gels. About half way up I took out the iPhone and put the head phones in and started listening to the Black Eyed Peas The E.N.D. album. I use some electric adrenaline sometimes to help me move faster. There was a lot of walking on this uphill section.

When I hit the next trail junction to Pawnee Pass I was comforted to see that someone before me had added some labels to the sign. They had added "Pawnee Lake" and "Pawnee Pass" with arrows. I was relieved to know that I was going the right direction as I was tripping all over the place at that point and my head was spinning a little. If you look on the lower left of the sign you can see the permanent marker "Pawnee Pass". The time stamp for this picture is 3:33:25 7/10/2010. 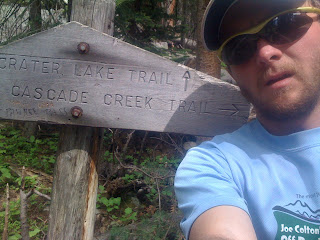 I headed up the final stretch, more walking than running.  I feel bad when I am out there trying to run and people see me walking. I feel like I am not trying hard enough. At this point I only had about six ounces of water left. I was already getting dehydrated. I put on my wind shell again when I went above tree-line because it was somewhat windy, maybe 20 mph winds. The trail was much better than I expected. Most of it is very run-able even going uphill. I had heard horror stories about how hard it was and it really was not terrible at all. Just before the top there is a small dihedral on the left side of the gully at a switchback and I stopped there to take pictures because the wind was picking up. This is the view looking up the last 50 vertical feet to Pawness Pass. The time stamp is 4:41:05 PM 7/10/2010. 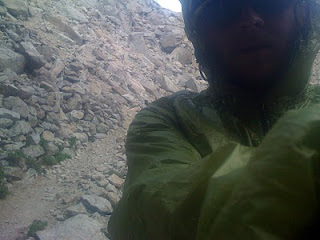 I crested the top 5:23 after I started for a 2:03 ascent from the low point on the west side of the continental divide. The wind gusts were up around 40 mph. Very walkable but when I was up in the air running it would blow me around. From there it is a simple four miles down to the the pavement which I did rather quickly considering I was out of water and food. There was a moose down by Long Lake which the tourists pointed out to me but I have seen so many moose this summer that I didn't stop or take a picture. I hit the pavement three way intersection at 6:28:24 after I started running for a loop time of 6:23:14. I finished the last half mile back to my van for a total on the go time of 6:34:11 and what I will call 27.4 miles. A very long day.

What would I do differently in the future? I would have liked to take more water, or maybe taken some energy drink like G2 gatorade. I was quite dehydrated when I got down. I think I took a good amount of food. It was only 400 calories but I think that more really would not have done much for me. I tried to get several of my friends to hang out on top of the passes to video tape me coming up and over but it seems that no one wanted to hike out a few miles. Also, now that I am familiar with the route I would not need to ask directions and that would save me some time. That is to say that going under six hours would not be very hard but getting under five hours would be difficult, at least for me.

What's next for me? I want to get up the Casual Route on Longs Peak again, free climbing the whole thing this time. There is also talk of a run at the Colorado Trail in August (500 miles, current speed record: eight days 12 hours). I also want to debut at the marathon this fall. I am not sure what will happen but I am sure that anything I do will have all of my energy. That definitely includes whatever employment I have as well as my physical recreation.