It's Not Rocket Science: Week 15

First off, in my running I had great muscle recovery from my mountain run around the Indian Peaks wilderness. That was very very encouraging. However, Starting about two weeks ago on Tuesday (when I ran my 22:21 four mile tempo I started to get a leg pain in my right leg on the lower right side. About three inches above the ankle on the outside. I originally thought it was from dropping a 200 pound rock on my leg while we were bridge building, but there has been no bruise and I am afraid that it is due to running in old shoes with improper running technique. The result was that I only ran five out of seven days this week. I ended my running streak at like 66 days in a row. That is up from a previous high of like 42. I wanted to get to 70 but my leg hurt so much (about a four out of ten on the pain scale) that I decided not to push it. It's really scaring me for several reasons. There is no way I am going to attempt the Colorado Trail record attempt with a hurt ankle. There is very little chance that I will attempt it without some form of sponsorship.  Third, I just don't like setbacks in my running. It shows that I don't know everything and that somewhere I have a problem. If it is overuse then it is probably shin splints because I have not been doing shin ups and when I don't I have a problem although the location is a little different that I am not totally sure it is shin splints.

Working I had a good week. The kids got their merit badges and managed their fear of heights. Everyone in my opinion is afraid of heights but some people can manage that fear a lot better than others.  Someone who is truly not afraid of heights is crazy.

Thursday I went to an O.A.R. concert at Red Rocks. That is a pretty crazy venue. You can see the city and the stars and a great band all at the same time. Here is a picture of just before the concert started. 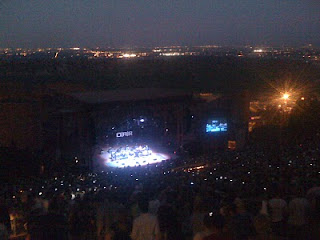 Saturday I went climbing on Lumpy Ridge. We tried to do a 5.10a traditional climb but between our hunger at 5:30 PM and the crack that disappeared at the crux we decided to back off. I am training for the Casual Route on Long Peak, which both of my prospective partners have said I get to lead the 5.10a crux at the top. I have never trad climbed that hard so I need to train so that I can get up it easy. That being said the crack is solid and would take great gear so all things considered it would be a nice place to  take a trad fall. Here is a picture of my normal partner traversing around to the rappel slings with Estes Park in the background. 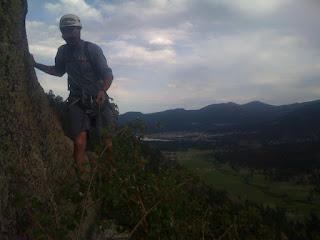 Job searching I emailed some people I have contacted in the past asking about interviews and job opportunities. In addition to the kind of job that I want (engineering) I'm considering professional guiding. I'm good enough that I could lead most trips out there. Also if I could just do day work and still have enough time to run it really would be kind of nice. The pay is better than I make now and I would probably be able to work year round.

I am accomplishing so much this summer of what I set out to do: run the Indian Peaks, climb on the Petit, attempt a 5.10 trad climb, climb the 5.12c on Signal Rock, run a couple 100 mile weeks, get in some good tempo runs at altitude, and go to a concert at Red Rocks. Climbing the Diamond on Longs Peak is really the only thing I have left that I wanted to do. The Colorado Trail is a bit more of an undertaking. The more I think about it it would really destroy my body for a few weeks and any fall marathon that I ran would not be as good. We shall see though...
Posted by Isaiah at 11:15 AM

Email ThisBlogThis!Share to TwitterShare to FacebookShare to Pinterest
Labels: climb, It's Not Rocket Science, running