This story begins in June of 2005. I was a 19 year old kid who was to be a conservationist at Pueblano at Philmont Scout Ranch. One of the program counselors (the assistant camp director) was a man named Andrew Bass. He had just graduated with a degree in mechanical engineering and was enjoying his "last" free summer before the working world.

We staying in mild contact through Facebook for several years while he worked at places around the world saving his pennies until I noticed that he was riding his bicycle from Vancouver to Tierra del Fuego. From September 2008 until April 2010 he rode and lived in many different cultural places. His next adventure is the Mongol Rally 2010.

Basically the Mongol Rally is a a group of people that drive cars with less than 1.2 liter engines from Great Britain to Mongolia and then donate their cars to the people of Mongolia. Along the way they raise money for charity. The charity his brother and him are raising money for is the Mercy Corp.

He has a website, Steppe on it!. They will be blogging about their progress and inevitable breakdowns and hiccups along the way to Mongolia over six months. If you have the ability give their charity a donation (they are covering their own costs). They also have a Facebook page: Steppe on it! Mongol Rally 2010.

Below is a picture of him riding through Ecuador. I am sure this adventure will be pretty crazy. The one statistic that was most interesting to me was roughly the following from Andrew, "One team set the record for the longest tow. A team broke down in France, like on day three and was towed all the way to Mongolia. There was an old retired couple with a Land Rover that started towing them and took them most of the way. Then in like Russia or something sold them the Land Rover for whatever they had in their pockets, like seven dollars. Then they finished towing themselves to Mongolia." 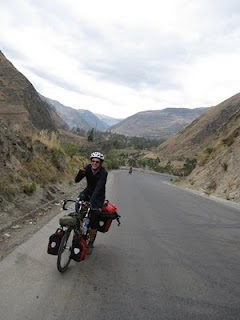