Longs Peak is my Favorite Mountain

For anyone that has ever tried to climb Longs or even just looked at it they realize it is an impressive mountain. (Although when I saw it last week after staring at K2 for a month I laughed at how small it looked from Estes Park.) There is no easy route. The class 3 Keyhole route is so slick that your hands just slip off and your shoes don't stick. I don't like the Keyhole now that I've gone down it three times. It's too much of a risk. The east face of Longs is where all the fun is at. The Diamond is this 1500 foot face that is nearly vertical, and overhanging in places. While this is a shorter big wall there is no route on it easier than 5.10a. There are however routes to the south of the Diamond that are low fifth class, with lots of exposure so they are great training climbs as well as culminations of training as well. That is one thing that is so great about climbing is that each route teaches something and each route is an accomplishment.

For more information about this great mountain:
Mountain Project has mostly hard technical climbs.
Summitpost has mostly the easier technical routes and the scrambles.

The Diamond from the base of Lambs Slide. 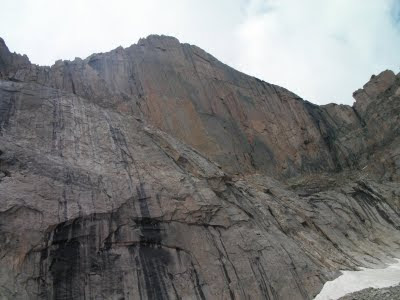 I have attempted Longs six times:
North Face (5.4) June 2004: backed off due to steep rock, inexperience, and lack of equipment
Keyhole (3) June 2006: eight hours round trip solo sumitting at 6 AM
Kiener's (5.4) July 2008: ended up doing Alexander's Chimney with the M4 finish wearing just boots and we had frozen hands from the waterfall, turned back at broadway
Casual Route (5.10a) August 2008: I planned ahead so much for this climb it went really well, except for summitting at 5:30 PM, 20:15 it remains my longest day to date in the mountains
Kiener's (5.4) August 2009: solo attempt turned around just below broadway due to wind and clouds, it started raining when I got to the trailhead
Kiener's (5.4) August 2009: success after doing two of the wrong pitches that felt like a 5.8 and a 5.6 and summitting at 4:15 PM
Posted by Isaiah at 2:30 PM