Fear and Relaxing in Pakistan

Pakistan is a scary place. At least it was for me and I am pretty sure that after this experience traveling in any third world country will be less stressful.

It started in Islamabad. I was terrified that everyone was a terrorist because so many people wear shalwar chamises and having never seen someone in person wear one before it took a few days to get used to it. Finally I realized that a shalwar chamise is the only thing everyone wears and most people were very friendly. Then there was the the two day bus ride to Skardu. Twice I saw anti-American and Israeli graffiti and we saw a tank and passed close to the Swat valley. Additionally, the whole time we're above the Indus river which is utterly terrifying and we're flying around these corners without guard rails 500 feet above the river. There was no way I could sleep. My face was glued to the window the whole time my side of the bus was closest to the river. Then in Skardu I had a 15 minute walk back to the hotel once alone. It was broad daylight but still I just felt like ma car would drive up and I would get pushed into the back seat and wake up chained in the corner of a dark room. That's ridiculous because Skardu is quite safe but it was what I was thinking.

Then when you're on the glacier there is always a fear that you will fall into a crevasse or slip on the ice and just scrape yourself up. Crossing little streams jumping from one piece of ice to another is not fun. The past few days when I was in Rocky Mountain National Park crossing streams on dirt and rocks and wood was a piece of cake compared to crossing a glacier. That fear also pales to the fear on the mountain. There is always something to fear on the hill. On the fixed lines there is the fear that the four people jugging up a 200 meter section will pull the one piton holding it in out of the rock or that the braided Korean rope rubbing over another rock will just break. While soloing I couldn't help but think that a fall of any sort would result in a quick return to base camp. It was easy soloing but it was still scary because the result of a fall would be bad. At camp after having a headache I was always scared that I didn't drink enough and would get HACE in the middle of the night or something. Then there was the danger of avalanches because we headed up several slopes that had some recent snow and once between camp one and two I was sure that there was going to be an avalanche so I pulled the fixed ropes out of the snow for 200 meters by myself. Then there was always the constant threat of bad weather. Good weather consisted of 30 mph winds and clouds above 7500 meters. Our team had several windy nights on the mountain where the fear of flying off the ridge was real. We never had a tent buckle or fly away but when the tent is flapping like crazy in even 30 mph winds you just don't know what's going to happen. At base camp we sat around and listened to the avalanches every few minutes while we played cards ignoring all but the loudest cracks and booms after the first week. Even there at base camp there was a fear that something bad would happen. Base camps have been wiped out and dozens killed by avalanches. There was the fear that something would happen on the mountain and we wouldn't be able to climb any more and our gear we had left up there would all be lost.

When I went down the mountain for the last time and got to base camp I finally relaxed. I no longer had to worry about falling, avalanches, rock fall, wind, snow, crevasses, ice, stream crossings, and the altitude. On the trek out I relaxed more and more as our elevation dropped and we started walking on solid ground for the first time in five weeks. On the jeep ride out I almost slept. Had it been dark I probably would have. We were still bouncing along dirt roads close to the edge of a road above a river with no guard rail but compared to everything that had happened to me in the preceding six weeks it was safe enough I could sleep. It was the same on the way out in Skardu and Islamabad I slept about 11 hours each night. If you really want to relax don't vacation on a mountain above a glacier, unless you like to relaxed after being scared sick for an extended period of time. 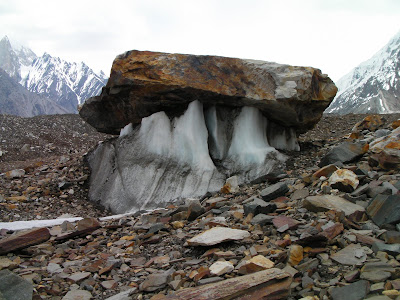 (The picture was taken on the hike out half way between Concordia and Ali camp. The rock is the size of a bus it was four feet off the ground on right and in the middle it was maybe 20 feet off the ground. We walked right beside it hoping the ice wouldn't melt in the 20 seconds it took to get around it.)
Posted by Isaiah at 2:35 PM