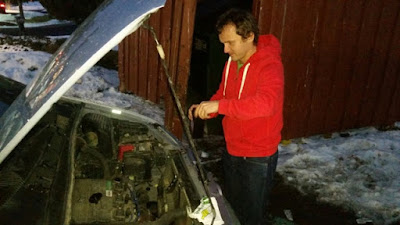 I'm going to take my time telling this story, partly because I don't know how it ends.

226,000 miles is not that far. It is about the closest distance to the moon at the closest part of its orbit (called perigee). It's the kind of distance for a 1990s Toyota where I frankly don't worry about it having issues.

Our road trip west to Colorado started off simple enough. I stayed with a friend in Pella, Iowa and we left at 5 AM, slightly delayed by winter storm Goliath, but not bad. We were doing 40-60 miles per hour in the worst of the storm, and were doing just under the speed limit by the time we were out of Des Moines.

Nebraska passed uneventfully and eastern Colorado was as smooth as could be too. We stopped at the Denver REI to buy a water bottle and Chapstick. However leaving REI the van intermittently flashed the low oil pressure light. It was very inconsistent. We thought it probably had to do with the altitude and started the drive up I-70. 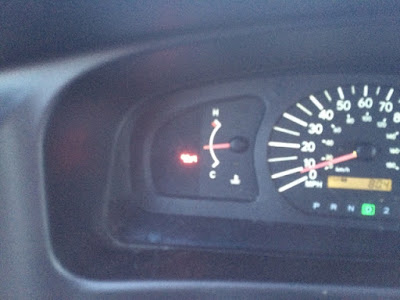 Unfortunately things quickly went down hill as we went uphill. By the Chief Hosa exit the low oil pressure light came on and stayed on, and the check engine light came on. They went off briefly, I think as we had a short downhill section. So we pulled off at Evergreen to investigate.

In a gas station parking lot we measured the oil and had a hard time reading the dip stick, so we added oil. As an engineer I know from experience that the majority of the time it is better to have too much pull than not enough. Not enough oil and you will have metal on metal wear. Too much oil and you might spill some or blow a seal, which are less severe than not having enough oil.

The engine sounded much better, no clanking or knocking so we thought that was probably it and began the 80 mile drive over two more mountain passes to our destination. However, just four miles into the drive the engine was making its worst noises yet. Clanking and knocking and sounding like metal on metal (a very bad sign). It was so bad we pulled off onto the shoulder, and after 10 to 15 minutes of frantic phone calls we decided  to head back to a mechanic shop in Evergreen, conveniently 50 meters from the gas station we had stopped at 45 minutes before.

We started by backing up a quarter mile, in the dark, up a steep on ramp on a relatively busy I-70...
Posted by Isaiah at 9:33 AM