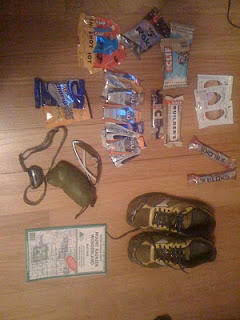 As with many of my adventures, this one began only two days in advance with a whole lot of encouragement from some of my friends. To be honest the idea was sparked the evening of Sunday the 12th of September after I ran The Enchantments. A friend suggested it and I could not stop thinking about it. Monday I decided I wanted to go for the unsupported fastest known time. The previous time was 33 hours and 45 minutes. Which for 93 miles is less than three miles an hour. I thought that would be very manageable.

Monday night I stopped by the Seattle REI and bought $35 of energy food including:


I also took the other gear in the picture as well as a long sleeve blue Nike shirt, Asics shorts with large mesh pockets and Discovery Channel cycling jersey.

Tuesday I woke at 6 AM with excitement. I started with an energy filled McDonalds breakfast with two sandwiches and a mocha. For six dollars it is hard to get so many calories at most places. I also stopped to buy gas, Gatorade, Five Hour Energy, and pick up some salt packets. One of my new friends, a former ultrarunner who still parties with the Seattle ultra crowd, highly suggested that I take extra salt so that I don't cramp. I've never cramped before but I took his advice. 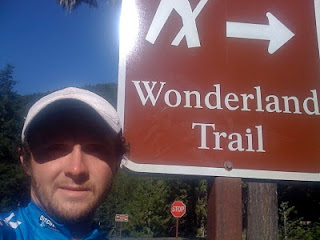 I arrived at Longmire around 9:30. I checked in at the Wilderness Ranger station and told them what I was up to. I wanted someone nearby to know that a crazy kid was out there trying to do something ridiculous. I finished changing into my running clothes and packing food and gear into my eight pockets.  At 9:55:39 AM I took a picture by the sign to the Wonderland Trail. The weather was amazing! I started running... 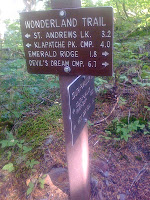 I was more or less flying at the beginning. I filled my bottles with Gatorade so the first 40 ounces of fluid had 200 calories which was really nice. I passed the South Puyallup River trail intersection at 12:47:29 PM. Thats 12 miles in 2:52. I didn't do the math at the time but looking at it now that's moving well.

It was hard running carrying the three pounds of food and other pound of clothing and gear and two pounds of water. It all added up to make the running less exciting than running unencumbered over a trail. But then again I had the ability to go farther. I forgot the salt in my van so throughout the day I was trying to lick my own sweat from my arms, forehead, and hat. In fact, if you wet the brim of your hat a little you can suck out the sweat and get all of that sodium. 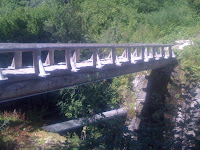 I believe I passed the bridge at North Puyallup River at 2:28 PM because that's when I took a bunch of pictures of a bridge and steep hills upriver which both match the time stamps and topo map. 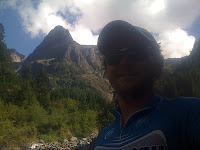 Of course this whole section was going very easy. I drew on many past experiences to get me through this. Compared to the Presidential Traverse the trail was a piece of cake. In fact, the whole Wonderland Trail is just amazing. I am sure that it would make a great six (or 11) day backpacking trek. Compared to the Indian Peaks loop I did earlier this summer the altitude is no problem at all. Compared to my adventure on the Casual Route in 2008 (20 hours on the go) 12 or 14 hours is not a very long time.
The whole afternoon was really a blast. My legs were feeling great and I was just cruising. The weather was good. I had food. My super-glued shoes weren't falling apart. What more could you want? 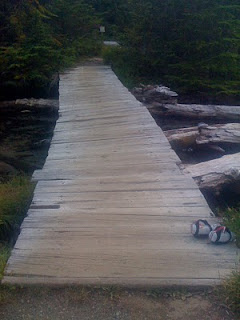 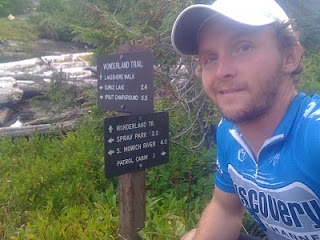 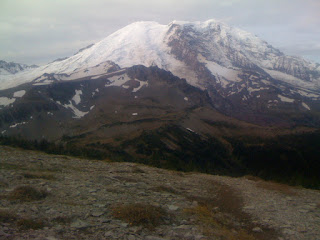 The sun came up and I gladly resumed my trotting and speed walking rhythm. The above picture captures part of the north face at 7:34:07 AM on Wednesday the 15th. The North face of Mt. Rainier looks so interesting. Very difficult. I had no idea there was any face like that on Mt. Rainier. I would have taken a better picture but it was simply too dark for my camera from 7:30 PM to 7:30 AM. I arrived at White River at 9:00 AM on the dot after scaring several early morning backpackers. I was continually hiking or running up behind people so fast that I gave them a scare. I started to announce my presence 20 feet back or farther so that they had some time to know I was there.
Again it was strange to arrive at White River with roads, people, cars, and industrialized stuff. From then on out the trail was amazing. I mean world class hiking. From White River to Summerland was seven great miles. That being said, I was getting tired. Uphills were not as fun as they had been. I had a fair amount of food left so I was eating more per mile than I had before. The whole run I was most concerned about getting up Panhandle Gap. At 6800 feet it was the highest elevation on the Wonderland Trail. It was also at the beginning of a long stretch without any way to get off the trail in case of emergency. 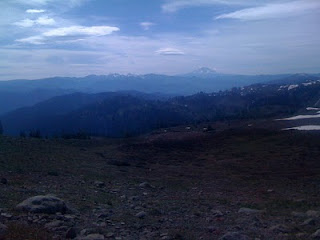 However it was quite easy and I arrived on top at 11:17 AM according to the above picture. I think that mountain in the center right of the picture is Mt. Hood. This picture is looking south from Panhandle Gap. Then of course the token self portrait with Mt. Rainier in the background. 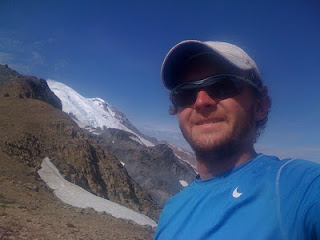 From there it was nice running, but starting to get a little painful. Down and down some more. I figured that I had 7000 feet of descending left and 3000 feet of ascending and just over 22 miles. I was almost done!
Just above Indian Bar I had a conversation with two rangers.
Me, "I have a tough question. Vanilla or Strawberry?" In reference to which flavor of gel I was going to eat next.
Younger ranger female, "Vanilla, definitely."
Then we proceeded to talk about what I was doing for about 15 seconds and then I was off hiking uphill again. From there I just kept moving, eating and drinking. It gradually became more cloudy and was sprinkling slightly as I passed through a deserted Box Canyon.
With 11-12 miles to go I managed to think of what I had left to do as only a 12 mile run. I thought I could push hard and pick up the pace and do it in less than two hours. For about a mile I moved rather fast. I probably did a sub 10 minute mile uphill. That soon ended.
Around mile 82 my right leg which had been hurting for 10-15 miles spiked to a five out of ten. That's not runable unless I am in fear for my life. My right ankle near the front was really hurting. It hurt most running downhill. Walking uphill was bearable so I spent most of the next few miles walking. I know from reading about ultrarunning that pain often turns around and people can continue on. That happened.
Around mile 85 when I saw the 7.5 miles to Longmire sign the pain subsided in my right ankle and I resumed a moderate amount of running. I passed some backpackers that were dong the Wonderland Trail in six days and of all the people I have met that is the fastest anyone has tried to do it.
At the sign that said 1.7 miles to the finish I started running hardish again. The rain picked up but not enough for my wind shell. At this point 12 minute miles downhill was my version of redlining. Every sign was nice to see. 1.6 miles. 1.4 miles. I was going to finish this massive trail. I popped out into Longmire at the same place I had entered the trail. I was slightly bewildered that the entry and exit were the same place. I took the picture below at 5:26:17 PM. 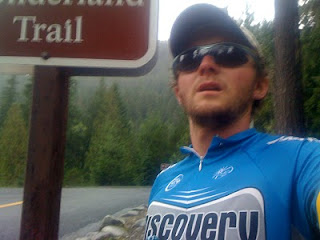 I walked over to the Wilderness Ranger Station and pounded on the locked door. The ranger I talked to the day before came down and we talked for a minute. She was impressed, and happy they didn't have to come rescue me. I changed into cotton clothes in the bathroom. Next, having forgotten the salt packets, I sat in the driver's seat, wearing cotton and ate a salt packet. I had a very strange feeling of all the muscles in my legs relaxing. They were not cramped up but they were tight and that salt packet was almost as good as a massage. I had five energy gels left so I ate about 3700 calories during the run. I also drank a quart of strawberry lemonade, my first Five Hour Energy, and a pint of water. That was enough to get me to Ashford.
At the local watering hole I had a bacon double cheeseburger. I have never actually had a double hamburger and I devoured a huge one with lots of cheese and bacon. The fries didn't slow me down either. I followed that down with a salted margarita and a tall glass of milk.
That got me to Puyallup where I stopped at Krispy Kreme and Jamba Juice for a few hundred more calories.
That was enough to get me back to Ballard to a friend's house. I took three steps toward his house and he just laughed at how I was walking. I had hot spots on my feet, my legs were sore, and I was tired. Strangely enough I wasn't tired enough to go to sleep. I talked with him and his roommates about big wall climbing in Yosemite and other adventures. We watched District 9 which I managed to stay awake through. It is a good movie. I ended the adventure by collapsing in a spare bed and sleeping like a rock.