It's Not Rocket Science: Week 24

What  a week! This week was the culmination of why I headed out west. That is to say, I "finished" what I set out to do... something, big.

The week started off in Leavenworth, Washington. After a late start the group was going to do another day of sport climbing. I really was not feeling like sport climbing. The two pitches I led on Saturday I had backed down from before I reached the anchor. To some large extent I was scared of falling. I just did not want to succeed on those climbs bad enough to keep going. That has kind of been a theme with me this summer. I have started up so many routes simply to end the route with a whole bunch of rappelling. The most recent Patagonia catalog was dedicated to failed climbs. That was a nice bit of motivation.

The way I view success and failure in mountaineering is a mixture of survival, experience, fear, accomplishment, and mental barriers. That is to say that while I have succeeded on so few routes this summer I have learned many things, which I will blog about over the next several months. The point is, making the top is only a small part of mountaineering.

Anyway, back to Sunday. I mentioned at breakfast that I was considering running The Enchantments, and they ended up talking me into it.

We all ate hamburgers at the Heidleburger Drive-In (it's a hamburger place) and someone mentioned that I should run the Wonderland Trail around Mt. Rainier. They mentioned that it was 90 miles so I answered that that was crazy. Then I could not stop thinking about it on the two hour drive back to Seattle. I decided on Monday after getting coffee from the first Starbucks that I would go for it. The first Starbuck is not cool by the way. It's a total tourist trap. Good coffee though... The weather was scheduled to cooperate for Tuesday and Wednesday and I wasn't terribly tired from The Enchantments so I went for the Wonderland Trail Tuesday morning. That trip report will be up tomorrow.

The rest of the week involved me driving 3000 miles from Seattle back east. Along the way I overnighted in Bozeman at a friend's house. That makes it five different friends houses on this road trip. Thank you awesome friends! I had coffee in the morning in Bozeman and interestingly enough I had as hard of a time finding parking on Main Street in Bozeman as I did in downtown San Francisco.

Saturday I spent part of the day looking at the Four Mile Canyon Fire, also known as the Boulder Fire. It was very surprising. The fire came within ten feet of burning houses at Gold Hill. While Gold Hill is only a 200 person town, anytime a a town burns it is devastating. It was strange to drive down the roads and see one house burned to the ground and the next house 30 feet away was fine. After seeing the destruction and ashes it scares me to think of being evacuated. When the fire department gives the order to evacuate the fire is still a mile or two away and everyone is in denial about their house being burnt. You could lose everything, or nothing. 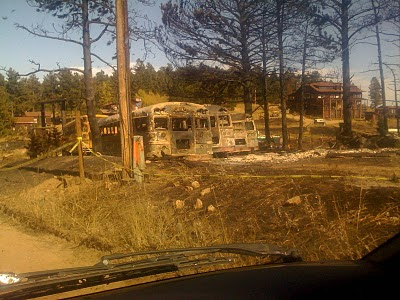 Above is the Colorado Mountain Ranch. The main building on the right was saved but the rest of the ranch was pretty much destroyed. The red glass on the buses tail lights melted and ran down in gruesome trails. It was not a happy scene.
Posted by Isaiah at 6:16 PM