Sunday September 12th I ran The Enchantments in Washington state just South of Leavenworth. I had planned on rock climbing that day but as the morning slowly moved on and the suggestion arose... Everyone was so encouraging that I do it so I did.

I started at the Coldchuck Lake trailhead at 11:40 AM exactly by my watch. The running was pretty easy and most of it was actual running until Coldchuck Lake. Around the lake were a few second class sections that slowed me down. Then it was quite a steep climb up to Asgard Pass. Mostly walking with a little running thrown in there. I reached Asgard Pass 1:59 after I started. From then on it was nearly all down hill.

More or less it was a gradual downhill run. The scenery was composed of rocks, lakes, and some trees here and there. The mountains like Dragontail were rather steep although I never actually saw the top of Dragontail because of the clouds. 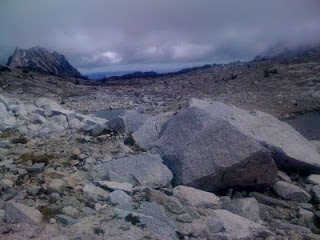 I continued down hill reaching the level of the first big lake (Snow Lake?) at 3:10 PM and it took 20 minutes to go around it crossing the little man made causeway at the end at about 3:30 PM. I ran down the switchbacks and just kept going. I took a fall and skinned off my right knee a little and had three minutes of pain walking. Then it started to feel much better and I started running again. There were some very nice clear six degree downhill sections of trail where I really worked to get my legs turning over and I was flying downhill. 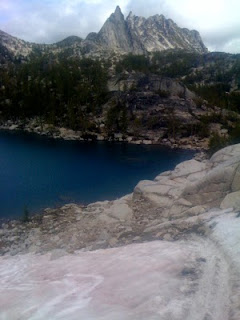 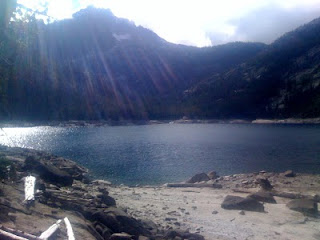 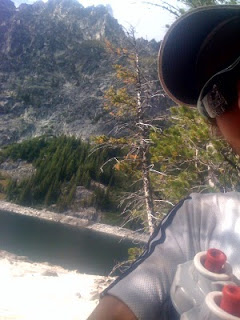 I hit a wall about 4:10 into my run but passed through it in only about ten minutes. After that I decided I wanted to finish in less than five hours. So I was really pushing it.
I finished at 4:51 PM 5:11 after I started. About 22 miles and about 2100 feet lower than I started despite running up over 4000 feet in the first two hours of the run.


Probably only a minute after I finished my friends who had spent the day rock climbing pulled into the parking lot to check if I had finished. It was amazing timing. We finished up the weekend with a splash in the river and food at the Heildelburger. Seattle was quite welcome that night with flat soft beds.