I had actually never been to Quebec, until yesterday. You know what, they all speak French here! Not in a Germans all speak German, but have English on many signs anyway, and most speak good English, but signs only have French, and at least up where we are, there are not too many English speakers. I just wasn't expecting that.

We are in Amos, Quebec. Which you might not have heard of, and you are missing out. For a town of 12,000 people they have a sushi restaurant, Vietnamese restaurant, Chinese restaurant, and at least half a down outdoor patios on more traditional restaurants.

We are halfway to Hudson Bay. Although I don't think there are actual summer roads that far north. I think there are only winter roads up this far. There is a train, the Polar Bear Express, that goes up to Moosonee, although I hear that even though there are Polar Bears as far south as Moosonee, there aren't a whole lot.

There are Moose up here, we saw a small one on the drive from Timmins yesterday. (It's kind of hard to get the camera centered when we're driving 40 mph and the moose is jumping.) 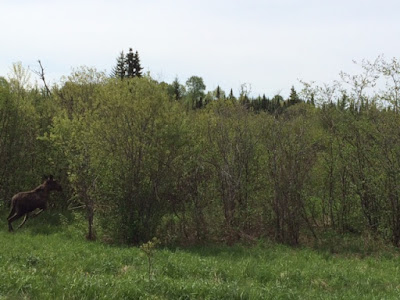 That's all for now, I have to go practice my French.

Email ThisBlogThis!Share to TwitterShare to FacebookShare to Pinterest
Labels: travel