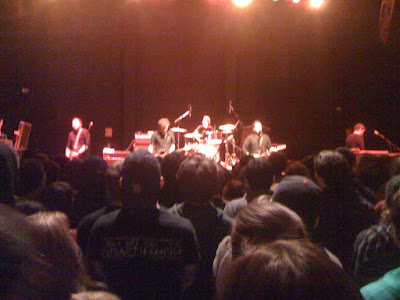 I went to a concert last night. The band was The Get Up Kids. (That's them in the picture.) They are relatively local to where I went to high school. In fact, Eudora, the title of one of their albums, hosted a track meet that my school went to every year. They were a big thing among my friends in high school but they broke up in 2005 and just this year got back together. This is being labeled more or less as a reunion tour. So who knows if the economy went bad and they are just trying to make some more money. As I sat there before the show I thought about how comebacks are never the same as the original. Then I started thinking about comebacks in running, then in other sports, then in mainstream careers. Sometimes I spend a lot of time thinking about a blog post before I write it.
Ok let's review some history first.
While all of my examples are athletes that is not the point of this post. I was thinking about normal people, like moms, who take a long time off from their professional career to do other things but eventually make a comeback.
In every example a comeback is different than before. The similarities I noticed are the loss of a naive happiness. I would like to say innocence but that is not the right word. There is a broader and deeper understanding of the world. Everything is not rose colored. In running one the of the best things that can happen to a runner is to have a long term injury that eventually clears up 100 percent. When that person decides to make a comeback it is with everything. That is part of why Lance was so successful. He faced the possibility that he would never be able to cycle again. So he went full bore into training and racing and for seven years nobody else could keep up.
A comeback is the high after the low. The high of the comeback may never match the magic of the original but it is so much better than the low.
Back to the concert last night, the lead singer made a comment about arguing on stage being part of the reunion tour. I realized then that the fans had changed as well. To me The Get Up Kids were about songs like "Campfire Kansas" which is a mellow, reminiscent song of a simpler time. I realized while getting thrown around the mosh pit on their intense songs that they were more angry or at least intense than I realized. That was what the crowd was eating up. I realized that these were not the guys that would be chilling out on the back porch with a acoustic guitar anymore. Comebacks are different, they aren't as happy. Lance got divorced. Britney no longer sings to middle schoolers.
So if you have to make a comeback the only advice I can give from my little experience is comeback with passion. When you commit to something actually commit to it. Who knows, your comeback may be as successful as Lance's seven victories.
Posted by Isaiah at 9:44 AM