How do we Deescalate the United States?

Syria, Columbia, Kenya, Sri Lanka, Rwanda... The United States is approaching an emotional election. Haha, back in 2012 and 2004 I thought those were somewhat emotional, this feels like a whole other level, especially after I read articles like this. I am a proudly unaffiliated voter (the technical term for what most call independents). I feel that the party system takes away from being American. In other words, being a Democrat or Republican takes mental energy away from being a United States citizen, and also gives you a pressure for to how you should vote regardless of your personal opinions. I have a range of opinions and ideals, not just "conservative" or "liberal". 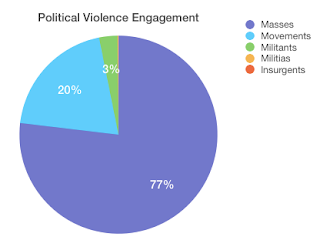 I made this chart based on my estimates from the article linked above, so I have almost no idea if they are realistic, but it seems in the ball park. You can't even see the insurgents portion of the chart above, but that's the Oklahoma City bombing, Charleston church shooting, Christchurch mosque shooting, and every other domestic terrorism incident, like the ones that some unfortunate places like Afghanistan or Pakistan have frequently. Frankly, if you enter the militant phase, where you are bringing a gun to a Denver protest or looking for a fight, something like the October Denver protest shooting caught on film that shows a person dying in five seconds, you should ask why you are doing this. How did that person hurt you? What did that person take away from you? How did that person make your life worse? Did you ever bother to tell that person specifically how he or she made your life worse?

The point is, those of us in the masses and the movements need to step up and say "that's not okay" when people show up at protests with bats and guns. When we're doing our online talking we need to keep it civil. I realized years ago that had I grown up in Germany in the 1920s and 1930s I would have been a Nazi, and personally I think I would have done really well as a Nazi. I could have been persuaded when I was a teenager that it was right. Now I've matured and learned a lot and I don't ever see myself working at a concentration camp as a career prospect. But that's a hard lesson! It's way harder to be a Dietrich Bonhoeffer or Martin Luther King Jr. than an anonymous soldier standing beside your friends hurting the enemy.

I don't have the answer. Well... except to say love is the answer. For anyone that's read the Bible, specifically the four Gospels of Matthew, Mark, Luke or John, it's super clear that Jesus came to share God's love with us. How many of us actually extend love to people other than our family? There is a homeless person living in his van behind my apartment. We, United States society, have failed that able bodied young man in his 20s. So the statement that now guides most of my voting these days is a Jesus quote from the Bible Matthew 22:39, "And the second is like it, 'Love your neighbor as yourself.'" How can I, how can we, better love our neighbors and even our enemies, including the homeless people living on the street behind my apartment complex?

Email ThisBlogThis!Share to TwitterShare to FacebookShare to Pinterest
Labels: relationships