I've been busy. May 26th to June 15th. My ankle has been healing well enough for me to get back into doing my more normal weekend fun. Actually, I feel my healing has plateaued the last two weeks or so, I'm not sure if that is temporary, or I need to get on my physical therapy exercises harder, or maybe there is a little more ligament damage than initially expected, or perhaps my weekend jaunts are a little more than I should be doing at this stage of the recovery.

So, June 1st I bicycled up Pikes Peak! I had two attempts last fall, both failing due to having a pulmonary embolism. Even though I am 10 pounds heavier now and in worse shape aerobically than I was last fall, I was able to do it. I think this particular Strava segment best encapsulates having a PE and in below average shape, and having no PE, in poor shape, and weighing 10 pounds more, meaning a PE makes it really hard to breathe.
Fun fact, I don't think of myself as a great descender, on a bicycle or running. But I'm not bad. I mean, I generally take big descents at a speed that I feel very in control, but somehow I have the time to beat for the first 12 miles of the Pikes Peak descent this year. 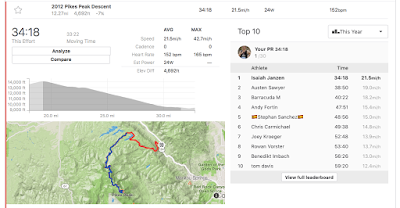 Then on Tuesday, June 4th I fell off my bicycle near the top of "SuperJames" which is the HC bicycle climb that goes from highway 36 up to Jamestown and then up to 8,500 feet above Jamestown. It's my go to 42 mile bicycle ride. It's so cool to go bicycle a HC (French for beyond category, meaning something like 3,000+ feet of ascending) climb on an average weeknight from my apartment! We had snow May 21st, and maybe even more recent up there at 8,000 feet, so there was still quite a bit of sand on the road and I could not slow down enough to make a left hand turn and when I hit the sand I fell over and thankfully did not get hurt any more than a bruised knee! It really got my attention. My head (encased in my helmet of course) bounced when I hit the ground. I am sure I do not have any concussion, but without a helmet I probably would have. Plus, I had slowed down to maybe 10-12 mph when I finally fell over, I only slid about 10 feet. Whew! I could have easily been going 25 mph, and in that case I would have hit the guardrail (which I was only 3 feet away from when I stopped) and maybe even gone over a steep slope.

June 8th I attempted "The Loop" as I call it. From my apartment in Longmont to Estes Park, over Trail Ridge Road, through Granby, up Berthoud Pass, into Idaho Springs, down to Golden, up to Boulder and back to Longmont. It would be about 180 miles, and include a 12,000 foot pass and 11,000 foot pass. Well, I failed, but I had a really good ride. I bicycled up to Estes Park, and just wasn't feeling as strong as I feel I need to be successful and safe and finish in the daylight. So I turned left and bicycled down the Peak to Peak to Ward and then down Lefthand canyon for a little 86 mile bicycle ride with 7000 feet of elevation gain.

June 15th, yesterday, I did a 11 hour and 45 minute excursion up and over Mt. Yale and down the north ridge into the airplane gully in my continuing research for a Nolan's 14 attempt. There was a lot of snow and in places it spend up our progress, but overall it definitely slowed us down when we would inevitably post hole. We then did a loop hiking down the valley until we met up with the Colorado trail at 9,400 feet and went back up to nearly 12,000 feet and down into the Avalanche Gulch Trailhead. Apparently I burned 8,051 calories yesterday. I estimated it would take 6-8 hours, so I was pretty off on that estimate. My ankle held up well. I did limp a fair amount, and had to take many small steps (52,000 steps to be specific), but the three of us made it. It was the hardest thing I have done since moving out here. Harder than doing Pikes Peak, the 86 mile bicycle ride, the February Piz Badille climb, Princeton and Longs Peak with a pulmonary embolism. It rained, snowed, and hailed on us at different times. I don't think my ankle will be ready to attempt Nolan's 14 this year. Or at least, it will most likely not be in condition to go sub 48 hours on Nolan's this season.

Work has been good. It's been a bit stressful and I've put in a number of 10 hour days, mostly unintentionally, because I get excited. We have a customer delivery coming up and it's all hands on deck to mitigate as much risk as possible and make it successful. What are some highlights? We were trouble shooting an issue three weeks ago, an issue we had been working on for weeks before that, and we finally made enough changes to get rid of the issue! It's the classic: struggle, struggle, struggle, success! Then, just Friday a new subsystem that I designed was tested, and it worked! There were so many little thing wrong with my design and prototype parts, that frankly I was not very confident it would work. But it did! It's a completely new subsystem to our product, and something that will speed up both our internal operations and is a huge customer benefit. I was not at all the driving factor, the credit goes to my coworker J for pushing for a long time to get this subsystem designed and implemented. The difficulty was that I just had never designed something like this from scratch before, so I didn't have much confidence it would work. I was afraid there was something I did not understand that would lead to failure.

I hope you've had some good weeks too. Next weekend I'll be out in the northwest climbing Mt. Rainier, so check out my Garmin inReach tracking to see how that goes: https://share.garmin.com/IsaiahJanzen
Posted by Isaiah at 2:35 PM